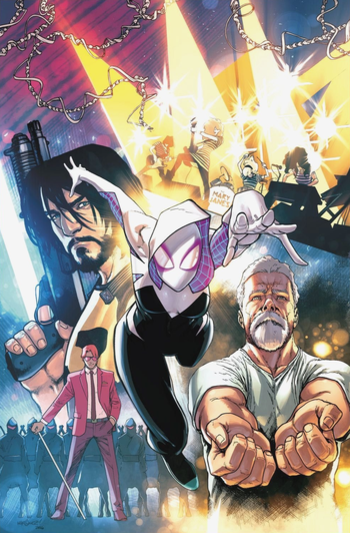 "When I put on this mask, I only did it because it freed me from responsibility. I thought I was special, and Peter Parker died because he tried to follow my example. I have to take responsibility for that. To make his death mean something."
— Gwen Stacy, the Spider-Woman of Earth-65
Advertisement:

The Night Gwen Stacy Died is easily one of the best-known Comic Book stories of all time, infamous for killing off Gwen Stacy, then-girlfriend of Spider-Man. Though she's continued to live on in the Marvel Universe since dying — usually through clones and alternate universes — she's almost always been defined by her death being used as a means for Peter's character development.

But what happens when the script is flipped and their places are reversed? In the Alternate Universe known as Earth-65, it was Gwen who got bitten by the radioactive spider and Peter who died on her watch. Here she's known as Spider-Woman, Ghost-Spider, or "Spider-Gwen".note "Spider-Gwen", while a cool name, completely defeats the point of having a secret identity, so Gwen obviously never used it. It briefly caught on in-universe after she revealed her identity, but she considered it an Atrocious Alias. However, the Fan Nickname caught on with the publishers and was adopted as the title for her solo series, making this a recursive, enforced case of I Am Not Shazam.

Making her debut in Edge of Spider-Verse #2, a tie-in to the 2014-2015 Spider-Verse event, Spider-Gwen struck a tremendous note with fans, prompting Marvel to announce her own ongoing book just weeks after the one-off issue was published. Written by Jason Latour, illustrated by Robbi Rodriguez, and colored by Rico Renzi (the same creative team behind Edge #2), Spider-Gwen made its official debut in February 2015, following the publication of two other ongoing titles headlined by Spider-Womennote Jessica Drew's Spider-Woman and Cindy Moon's Silk.

, making it one of the highest-selling launches of any comic book in 2015. Spider-Gwen came to a close after five issues, due to being a last-minute addition to Marvel's publication schedule prior to Secret Wars, but she did appear in the second volume of Spider-Verse as a tie-in to that event.

As part of the All-New, All-Different Marvel initiative that resulted in the aftermath of Secret Wars, Gwen returned with a new ongoing title —Radioactive Spider-Gwen— while also featuring in the multiversal Web Warriors, as a member of the team. This run had Latour et al. return, and ran for 34 issues. Upon Marvel's Fresh Start, Gwen gained a new ongoing comic series entitled Spider-Gwen: Ghost Spider, with Latour's team leaving for a new creative team consisting of Seanan McGuire as writer, Takeshi Miyazawa as pencillernote Rosi Kämpe during the Spider-Geddon arc, and Ian Herring as colorist.

After 10 issues, Spider-Gwen: Ghost Spider would end and be replaced with a Sequel Series: Ghost-Spider (2019). This series provides the biggest change to her status quo yet: Gwen will now immigrate to the mainstream 616 universe. Splitting time as a college student and a superhero, now one of many and not the only one, Gwen finds all new challenges. See the relevant page for tropes pertaining to that series.

Spider-Gwen quickly found her way outside comic books, with a variant of the character who hails from the same universe as Miles Morales making an appearance in the final season of Ultimate Spider-Man (2012), just two years after her debut. Marvel's Spider-Man's incarnation of Gwen Stacy would go on to develop spider powers herself later in that show's run. Versions of the character more reflective of the Earth-65 Gwen Stacy's backstory and persona would later appear in the Marvel Rising franchise (the first instance of the character using the alias "Ghost Spider") and Sony Pictures Animation's Spider-Man: Into the Spider-Verse.