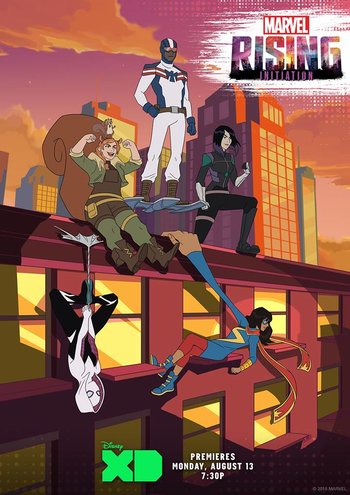 Marvel Rising: Initiation is a series of six four-minute animated shorts, and the first animated entry in the Marvel Rising franchise. The shorts debuted August 13, 2018 on Disney XD, before being posted online the following day on the official Marvel Rising website.

After Ghost-Spider once again evades capture from the NYPD, Captain George Stacy enlists the help of S.H.I.E.L.D. to apprehend her. The reason? Months earlier, an young Inhuman named Kevin was found murdered in an abandoned warehouse, with the only other person present being the aforementioned web-slinger. However, Ghost-Spider isn't the culprit, with the real assailant being an unknown woman who left the scene shortly before the police arrived. The shorts follow the beginnings of her efforts to clear her name and avenge her friend's death, while Patriot and Daisy Johnson attempt to bring her into custody. Meanwhile, Squirrel Girl and Ms. Marvel are in the city for their first superhero team-up.

Initiation can be viewed here

as individual shorts, or here

Neither Ghost-Spider or her plot made an appearance in the next Marvel Rising entry, Marvel Rising: Secret Warriors. The character's story was continued in Marvel Rising: Chasing Ghosts, a 22-minute television special premiering January 16, 2019 on the Marvel HQ Youtube channel.