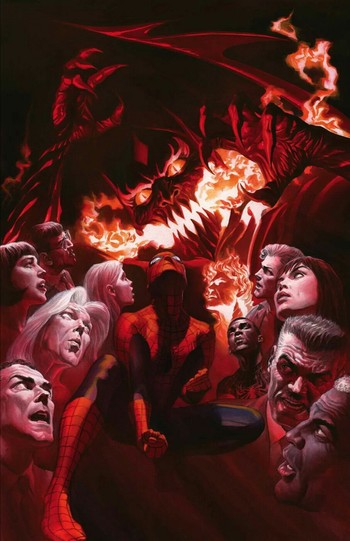 Go Down Swinging is a 2018 Spider-Man storyline. This is the final storyline of The Amazing Spider-Man (Dan Slott).

Peter Parker is at the lowest he's been - he's lost his company and his money, he's mocked by the world at large, forced to live in a pathetic apartment and crawled back to the Daily Bugle for work. Conversely, Norman Osborn is at the top of his game. Thanks to obtaining the Carnage symbiote, his Green Goblin powers are active once again and he's stronger than ever. Now he's ready to crush Spider-Man once and for all. No one is safe as the deadly Red Goblin is born, gunning for Spidey and all of his friends and loved ones. Spider-Man must meet him head on and, if he has to, he will Go Down Swinging.

This story serves as Dan Slott's swan song for the Amazing title before moving over to Tony Stark: Iron Man for the Marvel: A Fresh Start initiative. This is also the 800th issue Milestone Celebration for the title.

Go Down Swinging provides these tropes: