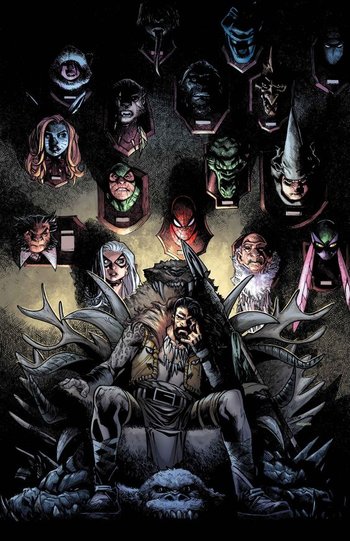 Kraven and his Trophy collection
"I am Kraven—I am a man of many names. The beast. The hunter. Kravinov. I am none of these now. Now I am just—the ghost...Now—everything is compromised. I have been returned to a world I do not belong in, cursed to road endlessly through its decaying paths...I yearn for death. A death that this time cannot be undone. Only the spider can kill me, the curse said. So I will find a way. There will be peace. But not yet."
— Issue #16, Opening captions.
Advertisement:

Hunted is a 2019 Spider-Man storyline. It is the first major storyline event for Nick Spencer's Spider-Man. Beginning in #16 of The Amazing Spider-Man Volume 5 and building up on issues prepared from #14 and #15, it eventually concluded in Issue #23.

Sergei Kravinoff, Kraven the Hunter, is a man who seeks one thing: a final peace. Revived at the hands of his family during the events of Grim Hunt, Kraven has sought to return to the death he brought himself to in Kraven's Last Hunt. Having created a son thanks to the High Evolutionary, Kraven sought out to collect numerous animal-themed supervillains to teach them to respect the animals they garb themselves as. Teaming up with Arcade, the creator of Death Traps, and Black Ant and Taskmaster who are dispatched to collect the animal-themed rogues from across the Marvel menagerie, well known-and-obscure, all to trigger the greatest hunt ever. And with our friendly neighborhood Spider-Man stuck in the middle, it's now hunt or be... Hunted, all the while Peter's sicker than he's been for a long time.

The Spiritual Successor to the mega-popular Kraven's Last Hunt/Fearful Symmetry storyline, Hunted will feature tie-in issues, also written by Spencer, with the distinct .HU suffixed to issue numbering, many of them focusing on one-shot characters and showing events outside Spider-Man's POV. #16.HU focuses on the Black Cat, #18.HU focuses on the Gibbon, #19.HU focuses on the Lizard and #20.HU on the Vulture.

Hunted showcases examples of these tropes: