Human Head on the Wall 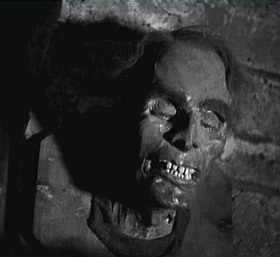 Sometimes it is not enough to merely stalk and kill your targets (including Hunting the Most Dangerous Game). Sometimes you want to have a permanent memento. So what better way to preserve the moment than to decapitate your victim, flense the skin off the head, preserve it, re-affix it to the skull, mount it on a plaque and hang it on your den wall?

A favourite pastime of Serial Killers and Egomaniac Hunters, though it also tends to happen to them as a form of Laser-Guided Karma.

A Sub-Trope of Off with His Head!, Dead Guy on Display, Taxidermy Is Creepy and Creepy Souvenir. If the victim was a Worthy Opponent, then you also have a Battle Trophy. Compare Decapitation Presentation, which is usually a bit more informal; and Shrunken Head, which is the primitive tribal equivalent of this trope. May cross over with Losing Your Head if said head is still alive by some means: which can be Played for Drama as a fate of And I Must Scream, or alternatively Played for Laughs as a Major Injury Underreaction.