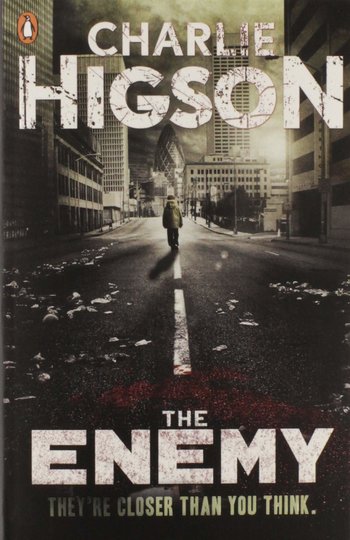 The Enemy is a series of post-apocalyptic young adult horror novels written by British author Charlie Higson, also the author of the Young Bond series.

The books take place in London after a worldwide sickness has infected everyone over fourteen years old (sixteen in the American editions), turning them into something akin to zombies and forcing kids to fend for themselves while fighting the hordes of "sickos". The first book, The Enemy, was published in 2009. Following it are The Dead (2010), The Fear (2011), The Sacrifice (2012), The Fallen (2013), The Hunted (2014), and the final book, The End (2015).

Though The Enemy starts off with as a simple Zombie Apocalypse tale, an ever-expanding cast and sprawling plot make the series more complex. Likewise, with Anyone Can Die in full effect from book one, just getting from point A to point B can be suspenseful.

Tropes associated with this book: