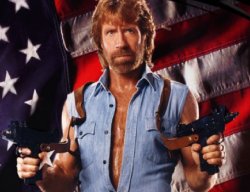 Most recent driver's license
photo of Chuck Norris.
"Google won't search for Chuck Norris because it knows you don't find Chuck Norris, he finds you".
— nochucknorris.com

Carlos Ray Norris (born March 10, 1940), better known as Chuck Norris, is an actor, writer, film producer, and martial artist best known for his roundhouse kicks and beard. Depending on your mileage, he's most remembered for:
Advertisement:

He is the third westerner in the documented history of Tae Kwon Do to be given the rank of 8th Degree Black Belt Grand Master, though he is often erroneously credited as the first. Also erroneously, Taekwondo is typically cited as his martial art. Chuck first studied Tang Soo Do, making it very popular in the west. He studied several other martial arts, including Taekwondo, later on.

He experienced a recent burst of popularity which can be linked to two pop-cultural phenomena: First, after the debut of the Chuck Norris lever on Late Night With Conan O'Brien (which produced a humorous out-of-context clip of Walker, Texas Ranger). Second, after the formulation of the "Chuck Norris Fact Generator" (a spin-off of a similar generator for Vin Diesel), a Memetic Mutation wherein facts were given that depicted Norris as an unstoppable force of badassery, that quickly gained wide popularity. The concept reached Ascended Meme status in a campaign ad for Republican Mike Huckabee. He also appears in a commercial

for World of Warcraft as part of a series of celebrity endorsements of the game. To a montage of him delivering a Curb-Stomp Battle to enemies, a narrator proudly proclaims "there are ten million people in the world of Warcraft because Chuck Norris allows them to live!"

Also, in 1986, he starred As Himself in a cartoon series titled Chuck Norris: Karate Kommandos in which his name was endlessly repeated in the opening sequence

One of his most recent roles was as Booker, a legendary lone-wolf mercenary in The Expendables 2, a role that's memorable for not only having him appear alongside other 80's action stars, but for Chuck himself cracking a Chuck Norris joke, officially turning them into an Ascended Meme.

According to Urban Legend, Norris was the man who taught Bruce Lee how to kick properly. Considering Norris' background in Tang Soo Do, a notoriously kick-heavy style, and Lee's early training in boxing and Wing Chun, both heavily punch-based, it's not impossible.

The real Chuck is as plainspoken, quiet, and honest as the characters he plays, but more likely to wrestle with his grandchildren than collect spinal columns. He currently lives in Grimes County, Texas, about an hour from Greater Houston. Chuck Norris sightings aren't uncommon and are a bit of a letdown for anyone who honestly expects the legends to be true. He's known for being very gracious with fans and involved with several philanthropic endeavors, including his charity Kickstart. He is one of Hollywood's most prominent Republicans, as well as an outspoken conservative Christian, creating his martial art form Chun Kuk Do, around a mixture of Christian and Martial Arts principles.

, you can see fictionalized versions of himself and Abraham Lincoln rapping against each other.

Chuck Norris doesn't chase you. He bends time and space to his whims to make you come to him.

Chuck Norris doesn't chase you. He bends time and space to his whims to make you come to him.