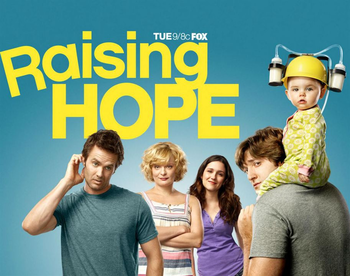 "Even though I was a mistake, I'm a mistake my parents would gladly make again. And that is something you and I definitely have in common. I couldn't have planned how you came to me in a million years, but I always want you to know that you're the best thing that has ever happened to me."
— Jimmy, to Hope
Advertisement:

Jimmy Chance is a 23-year-old slacker with not a lot of prospects. He works for his father Burt, grooming lawns and cleaning out pools. His mother Virginia works as a maid. His delirious great-grandmother Maw Maw lives with them and sometimes believes he's her old dead husband. He realizes how mediocre his life is and starts desperately searching for his place in the world.

While on a snack run he meets a young woman, Lucy, whom he thinks he's rescued from an abusive boyfriend. He thinks it's fate and they hook up in his van that night. The next morning, it turns out Lucy is a serial killer (who kills her boyfriends, natch) and is subsequently arrested. Months later, she informs Jimmy that she is pregnant with his child and hopes that will keep the state from giving her the death sentence. It doesn't work and as she gets the electric chair, Jimmy finds himself a single dad with a baby girl named Princess Beyonce.

His home life is barely functioning as is and his parents believe it would be better to leave the child and put her up for adoption. Recognizing this is a chance to do something decent with his life, Jimmy renames his daughter Hope and is determined to raise her himself. With a little help from his family and the cute girl at the local grocery store, Sabrina, Jimmy finally has something to look forward to.