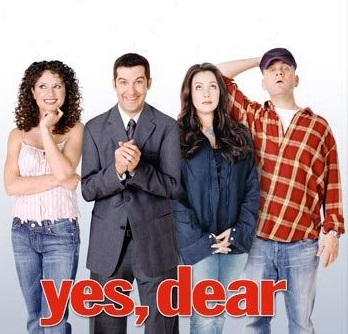 From left to right, Kim, Greg, Christine and Jimmy.
Advertisement:

Greg (Anthony Clark) and Kim Warner (Jean Louisa Kelly), together with their offspring (Sammy; their daughter, Emily, joins the cast mid-series) led a well-to-do, if uptight and isolated, life, the latter of which started to change when Kim's sister and her husband, Christine (Liza Snyder) and Jimmy Hughes (Mike O'Malley), came knocking on the Warners' house door (with their own children, Dominic and Logan, in tow) asking for shelter. In stark contrast to the lifestyle of the Warners, the Hughes' attitude is far more outgoing and laid-back. Much of the show deals with issues relating to marriage, family, work and/or sex.

Despite the generic nature of the series, the show had a distinct postmodern feel, especially in later seasons. Breaking the Fourth Wall and Gainax Endings were common, and a handful of episodes featured ending tag scenes with the actors breaking character.

A minute or so later, after staring at his letters in silence for several seconds, he asks if "gloonge" is a word.