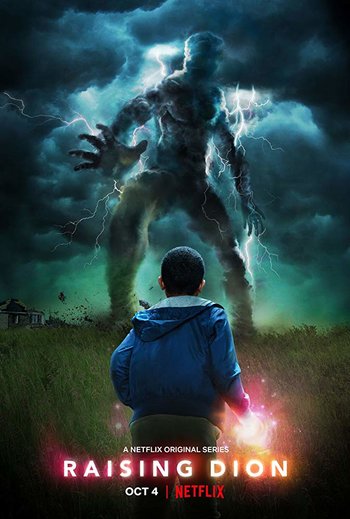 Nicole: I don't know what's coming, but I can promise you one thing. Whatever it is will have to go through me first.
Advertisement:

Raising Dion is an American superhero science fiction web television series produced by Michael B. Jordan, that premiered October 4, 2019 on Netflix. It is based on the 2015 comic book and short film of the same name by Dennis Liu.

The series follows the story of a woman named Nicole Reese (Alisha Wainwright), who raises her son Dion (Ja'Siah Young) after the death of her husband Mark (Jordan). The normal dramas of raising a son as a single mom are amplified when Dion starts to manifest several magical, superhero-like abilities. Nicole must now keep her son’s gifts secret with the help of Mark's best friend Pat (Jason Ritter), and protect Dion from antagonists out to exploit him while figuring out the origin of his abilities.

On January 2020, the series was renewed for a second season, which was released on February 1st, 2022. Just two months after the second season had premiered, on April 26th, it was announced that the series had been cancelled.