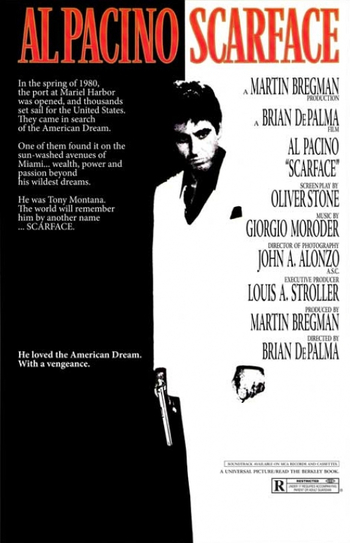 The World is His.
"All I have in this world is my balls and my word, and I don't break 'em for no one."
— Tony Montana
Advertisement:

Scarface is a 1983 crime film directed by Brian De Palma, written by Oliver Stone and starring the great Al Pacino. It is a loose remake of the 1932 film of the same name directed by Howard Hawks and written by Ben Hecht (both of whom the 1983 film is dedicated to).

The film centers on Antonio "Tony" Montana (Pacino), a Cuban refugee deported to Miami during the Mariel Boatlift of 1980, during which Fidel Castro sent off not only the relatives of Cuban-Americans abroad but also the dregs of his jails. The film covers Tony's violent rise to the top of Miami's drug trade and his eventual Descent into Addiction and paranoia that alienates him from his friends and family.

Scarface's graphic violence and language originally drew controversy and was originally panned by most critics, but has since been not only reappraised but also developed a cult following and become an influential popular work. It was especially influential on Hip-Hop culture.

In 2006, two spinoff video games were released, based on What If? scenarios that avert the film's Downer Ending. The first, The World Is Yours, is a Third-Person Shooter that allows players to control Tony in sandbox-style gameplay as he seeks to rebuild his reputation and empire after losing everything. The second, Money. Power. Respect., is a Turn-Based Strategy game where players make strategic decisions and command groups of minions. An unconnected comic series, Scarred for Life, follows a similar premise. In December 2016, Tony Montana was made a playable character in, of all things, PAYDAY 2, as part of some potential early cross-promotion for a remake of this film that is currently in the production stages. His mansion from the film also makes an appearance as a playable heist.

Say hello to my little tropes: