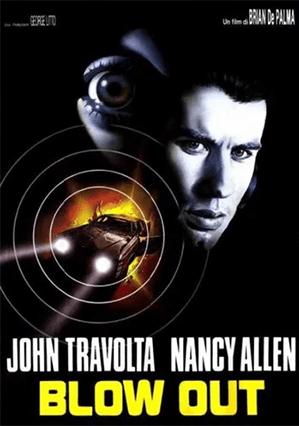 Blow Out is a 1981 thriller directed by Brian De Palma and starring John Travolta, Nancy Allen and John Lithgow.

Travolta plays Jack Terry, a sound technician for a low-budget exploitation film, who is told to find more a realistic scream for a slasher victim. One night, he's out in the woods by a road, recording general sound effects. A car comes down the road, there's an explosion, and it goes off the side of the road and into the water. Jack rushes to the water and jumps in. He discovers a man dead in the car and a woman named Sally (Allen) trying to get out. Eventually, Jack is able to break a window in the car and pull Sally out to safety.

At the hospital, Jack discovers the man in the car was Governor McRyan, a possible presidential candidate. Lawrence Henry, McRyan's chief adviser, tells Jack not to tell anyone else about Sally being in the car. Jack is okay with that, at first. He's less okay with the fact Henry and the police seem content with the explanation McRyan's tire simply blew out. Jack is sure he recorded the tire being shot out right before the car went over the water. What he doesn't know is the man who shot out the tire, Burke (Lithgow), who was working on behalf of others to stop McRyan, is now out to get both Jack and Sally.

Quentin Tarantino, no less, has called this De Palma's best film and one of his three favourite films. See also Blow Up, the inspiration for this film.

This film features the tropes: