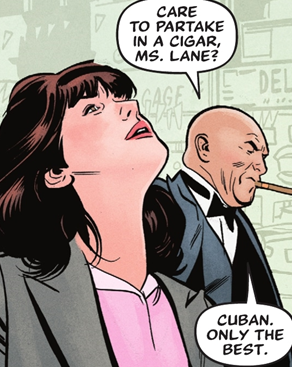 Jerry: They're real Cubans?! They're human beings from Cuba?!
Kramer: I said Cubans! What did you think I meant?
Jerry: Cigars?!
Kramer: Jerry, Cuban cigars are illegal in this country. That's why I got these guys.
— Seinfeld, "The English Patient"
Advertisement:

In American media, Cuban cigars, which were banned in the United States after Fidel Castro seized Cuba in 1959 (an embargo that was temporarily lifted

in 2015, but mostly resumed in 2017), have generally been considered items that cannot be acquired without the right connections and/or money. Therefore for a character to offer or have a Cuban cigar is usually used as shorthand for having one or both. Because of the reasons why Cuban cigars had that status in the first place, there is usually also a sense of nefariousness added to whoever has or offers the cigars in question.

Sometimes a case of Creator Provincialism and/or Eagleland Osmosis, when a character boasts about their cigars coming from Cuba in works set outside the U.S., where there are no trade embargoes against Cuba to restrict their availability in the first place.

The current political situation is not quite a Trope Breaker just yet, but it does greatly diminish the significance of a character possessing Cuban cigars, since they're no longer considered contraband in the US, and all that's needed to get them is a passport. Do note, though, that while restrictions against importation have been relaxed to the point that quantities can be purchased from outside the US and legally brought into the country, the cigars are for personal use only and are not legal to resell. They still cannot be bought wholesale from Cuba and resold by retailers in the U.S., so until such a time that the trade embargo is fully lifted, calling your local tobacconist to ask for Cuban cigars will only get you an annoyed tobacconist.