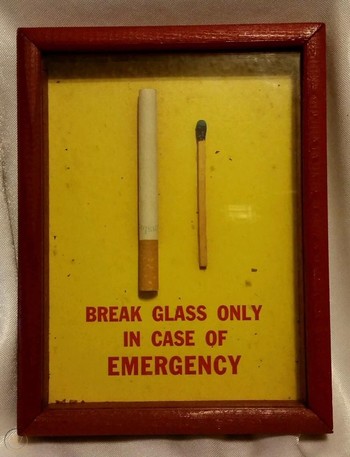 A character who has quit smoking or drinking keeps one, last unsmoked cigarette, or one last bottle to remind him of why he quit. May be a dare, a test where he can prove to himself that he has quit for good, a quitting device to prevent him from buying more, or a memento to remind him of what they were like before quitting.

This item can be used for drama. If the character is at a very low point in their life(or the story), they may find themselves staring longingly at it as they consider starting the habit up again as their thoughts turn self-destructive.

Sometimes, if the character goes through a particular level of stress, but particularly if he is doomed, he may light up that last cigarette or swig from that last bottle. Especially if he's making a Heroic Sacrifice.

May also be a Chekhov's Gun.