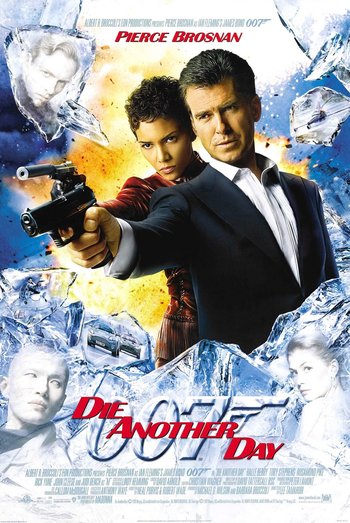 The One With… all that CGI.

Die Another Day is the twentieth James Bond film and the fourth and last to star Pierce Brosnan. It is also the final film set in the original series started by Eon Productions with Dr. No in 1962 before getting a Continuity Reboot in 2006. It was directed by Lee Tamahori and came out in November 2002. Madonna performed the Title Theme Tune and has a cameo in the film.

Per usual, the film opens with a botched mission in which Bond is betrayed and beaten up: this time, the North Koreans have the honour. Freed via a prisoner exchange after 14 months of torture, Bond is aghast to learn his freedom was purchased at the cost of his adversary, a war criminal named Zao (Rick Yune), walking scot-free. Discharged by MI6 and receiving a predictably chilly reception from M, Bond becomes a rogue agent and resumes hunting for his quarry.

Following Zao's trail leads him to Gustav Graves (Toby Stephens), a wunderkind entrepreneur who's made a fortune in blood diamonds and is building some kind of space-based sunlight reflector which in no way resembles a death ray.

The film holds many vignettes to previous Bond outings, such as Brosnan playing the 'loose cannon' in the tropics (Licence to Kill), Halle Berry exiting the water in Slow Motion (Dr. No), a diamond-encrusted sky laser (Diamonds Are Forever), action scenes bordering on self-parody (Moonraker) and many, many more Mythology Gags for the franchise's 40th anniversary.

After the film's release, Eon Productions decided a reboot was needed to bring the series back to its more grounded Darker and Grittier roots even going back to the very first Bond novel. Despite being in his early 50s at the time, Pierce Brosnan was still anticipated to reprise the role (Roger Moore played Bond till he was 57, after all). However, in February 2005, Brosnan was told by the producers that he would be replaced, and in October of that year, Daniel Craig was officially announced as the new Bond.

Preceded by The World Is Not Enough and followed by Casino Royale.