Film / The Diary of Anne Frank 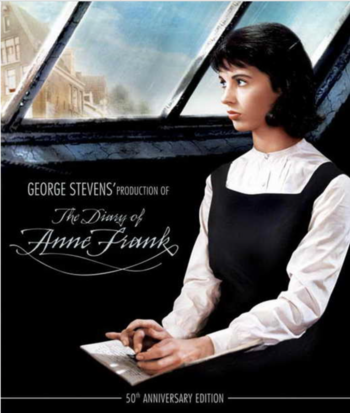 Anne: In spite of everything I still believe that people are really good at heart.
Otto Frank: She puts me to shame.
Advertisement:

The Diary of Anne Frank is a 1959 drama film directed by George Stevens. It was based on Frances Goodrich and Albert Hackett's Broadway play of the same name, which in turn was adapted from The Diary of a Young Girl.

It tells the story of Anne Frank, a Dutch Jewish girl who went into hiding in 1942 at the age of 13 with her family, concealed in a hidden annex in the office building where her father had worked. The family remained hidden in the "secret annex" for two years, with young Anne writing in her diary the whole time.