Film / Diary of a Nudist 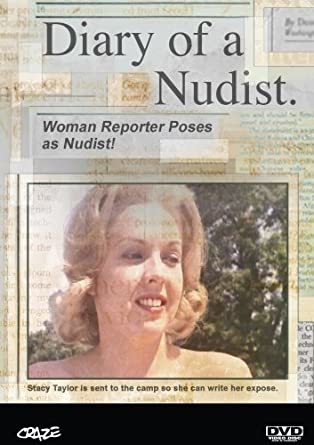 "There are many good reasons for the nudist philosophy. We believe that sunshine and fresh air must definitely result in both physical and mental benefit. Sunshine and fresh air are natural phenomenon, and ours is a way of life which pursues these forces in the most natural and unencumbered manner possible. We strive for a healthy mind, and a healthy body. We veil that nudism eliminates tension, brings forth complete relaxation, which enables man to find his true values. This is our greed and our goal. A true way of life."
— The owner of the camp relaying an oath to the members

Diary of a Nudist is a sexploitation film (1961) written by nudist film pioneer Doris Wishman, starring Davee Decker (Stacy Taylor) and Norman Casserly (Arthur Sherwood). A chief executive newspaper editor called Arthur Sherwood accidentally enters a nudist colony while exploring, and he personally finds it to be deplorable. One of his employees, Stacy Taylor, are assigned to infiltrate the camp. As she finds the nudism lifestyle to be pleasant and finds the members completely affable, she begins to doubt Arthur's assumptions that the camp is being instigated with truly negative intentions. Prompted by Stacy, he visits the camp himself to prove whether her claims are true as well, albeit still wearing something.

Tropes for this film of cleanliness include: