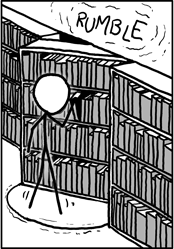 "Hey look, The Chamber of Secrets!"
Villain: I wish for the entire wall to rotate, turn upon its axis. Roundy-round!
Builder: Why?
[beat]
Villain: I just do.
— That Mitchell and Webb Look
Advertisement:

At least 90% of all Cool Houses have featured one of these. A Bookcase Passage is where a Secret Room or a Secret Underground Passage is hidden behind a bookcase or triggered by the removal or manipulation of a book in a bookcase.

It doesn't have to involve books; it could be any kind of hidden or secret passage with a disguised door. It just tends to be behind bookcases an awful lot. Another common form is where the passage is hidden behind a fireplace, and activated by a lever of some kind. The switch is often found using a Luck-Based Search Technique.

Occasionally, there's a gag where two characters go back and forth through the passage and keep missing each other because they're on opposite sides of the bookcase. This is most likely to happen when the bookcase doubles as a revolving door — a common design decision.

Amity's hideout is accessed by moving a certain book in the Romance section, causing the shelf to slide away and reveal her hideaway.

Amity's hideout is accessed by moving a certain book in the Romance section, causing the shelf to slide away and reveal her hideaway.