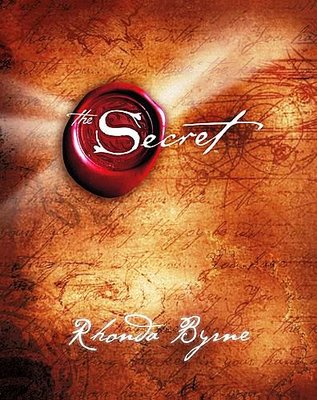 The Secret is a self-help book by Australian TV producer Rhonda Byrne that claims to be able to teach you how to get everything you ever wanted (yes, everything! Even that!) by simply keeping a positive attitude and performing some simple exercises such as meditation, visualization (basically, using your imagination), and writing about what you want. In the book, the eponymous secret is the "Law of Attraction," which states that a positive outlook on life and positive thoughts will attract positive things into your life, whereas negative thoughts will do just the opposite. A big part of this is daydreaming about the things you want and believing they're already yours.

There's also some Technobabble regarding Einstein, string theory, and quantum mechanics. Also, there are a lot of personal anecdotes from a bunch of people who are suspiciously privileged (i.e., mostly white men).

Optical engineer and sci fi author Travis S. Taylor recently put out a book titled The Science Behind The Secret attempting to support The Secret with appeals to authority, noting a long history of similar beliefs, and a terribly butchered reading of quantum physics.

If The Secret actually works as intended (which it might, at least in the sense that being positive will make you more productive), then it's a real-life Magic Feather. If not, it's just a multi-million dollar franchise which teaches bad values.