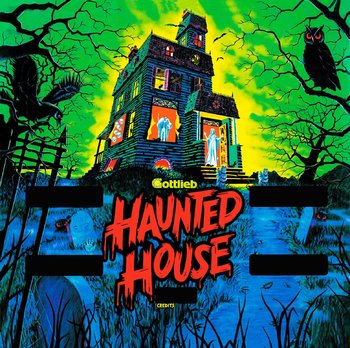 Haunted House is a Physical Pinball Table released by Gottlieb in 1982. Designed by John Osborne and illustrated by Terry Doerzaph, it is considered to be one of Pinball's iconic tables, the first game to take place across three interconnected playfields.

As the title suggests, this game takes place above, below, inside, and around a Haunted House, with the player thoroughly exploring it for points while avoiding the various traps and spirits. While lightning flashes on the backglass, start on the main floor, then take the ramp or the up-kicker into the Attic with its occupied coffin. Alternately, use the Secret Passage or the Trap Door to enter the Cellar, where the reversed playfield is filled with rats, a shackled skeleton, and grabbing ghouls. Return to the main table, knock down the cobwebs for double scoring, then tap the five targets for an Extra Ball or a Special.

Haunted House is highly praised by pinball enthusiasts, who laud its fast action, unorthodox layout, and frightfully attractive art; many consider it Gottlieb's best table ever, with some even calling it the best pinball from any manufacturer. If there are any complaints, it's the lack of speech and multiball, which were omitted to reduce costs. The game can also be a maintenance nightmare, as its numerous components and complex design means there's more things that could go wrong. 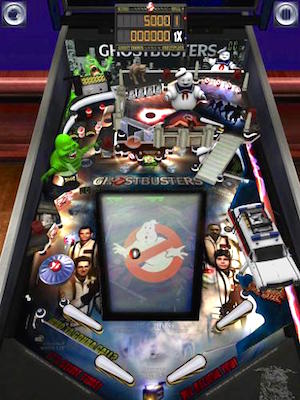 The game is essentially a rethemed version of Haunted House, replacing the manor of the original with the New York City from the first two Ghostbusters movies. As part of the crew, players must use the tubes, ramps, and manhole to travel between the City, the Subway, and the Rooftop while building up the Ghost Bonus. Raise the Slimer Bumper to reveal the ball lock, start two-ball multiball, then head for the roof to Cross the Streams and destroy the Stay-Puft Marshmallow Man.

Players tend to be divided over the game; some pinheads enjoy it even more than the original, thrilled for a way to finally play Haunted House with multiball across all three playfields. Others find the execution lacking, citing that the slapdash use of the Ghostbusters license and repetitive music makes it too distracting to be fun.

This table has since been removed from the mobile app stores.

For the Physical Pinball Table from Stern Pinball, click here.

Mayor: "I'm going down as the mayor who let New York get sucked down into the Tenth Level of Hell!"