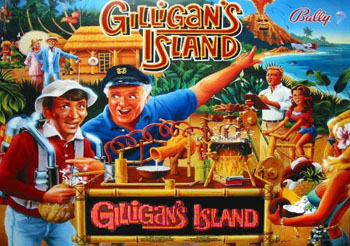 Gilligan's Island is a Licensed Pinball Table designed by Ward Pemberton and Dan Langlois, with artwork by John Youssi. It was released in 1991 by Williams Electronics under the Bally label.

Based on the popular television sitcom, the game begins with the Castaways' tranquil island home disrupted by the impending eruption of Kona, the local volcano god. To avoid the calamity, Gilligan (and the player) must scour the island for seven ingredients to make the Professor's Secret Formula Lava Seltzer and relieve Kona's pressure. After gathering up the ingredients, Gilligan must then traverse the Jungle Run and deliver the Seltzer before it evaporates — but will the rotating jungle turntable send Gilligan in circles and sink the Castaways instead?

Gilligan's Island is noteworthy for being the first Williams pinball released with a dot-matrix displaynote Terminator 2: Judgment Day was the first to be made with one, but was released later., a few months after Data East's Checkpoint first offered a DMD. That doesn't redeem it among pinheads, however, who find Gilligan's Island unchallenging and unbalanced — collecting the ingredients is too easy, and mastering the Jungle Run ramp shot allows players to repeatedly relieve Kona and rack up several hundred million points in one round. Supporters counter that the classic sitcom humor and undemanding gameplay make this a perfect game for kids, families, and casual players.

Mr. Howell: "I hope there's more where that came from."