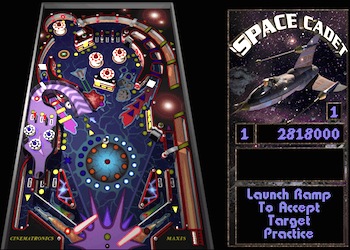 The complete version of "Space Cadet", after Microsoft's release a few months prior.
Advertisement:

Full Tilt! Pinball was a pinball computer game for the Microsoft Windows PC and Apple Macintosh. It was developed by Cinematronics, and published by Maxis in October 1995.

Similar to Last Gladiators, Super Pinball: Behind The Mask, Golden Logres, or the Pro Pinball series, the games are presented as pre-rendered playfields with a single fixed camera, providing for fast gameplay even on low-end machines. The game consisted of three separate tables:

A tweaked version of "Space Cadet" (Official title: 3D Pinball for Windows – Space Cadet) was included with consumer copies of Microsoft Windows, starting with the Windows 95 Plus! pack, in August 1995, up to Windows XP. Some differences: Windows's version only supports 640×480-pixel resolution (Cinematronics's supports three different resolutions up to 1024×768 pixels); the image on the side is a two-dimensional image as opposed to pre-rendered 3D; the words Maxis and Cinematronics have been changed from the yellow to a dark red, making them harder to see; it sports a splash screen that merely says 3D Pinball and shows a small pinball graphic with faded edges; music is not enabled by default in 3D Pinball; it has only one soundtrack when compared to Full Tilt!. Furthermore, there are changes to the rules, including no access to the Meteor Storm multiball mode. The practice ended with the release of Windows Vista when the 32-bit game could not be ported over to Vista's 64-bit architecture.

The Windows version of Full Tilt! Pinball was originally released as shareware, supporting one player with a resolution of 640 ×480; the full version added 800 × 600 and 1024 × 768 resolutions and allowed up to four players to compete. Of the games themselves, "Space Cadet" is considered the simplest and easiest, while "Skulduggery" and "Dragon's Keep" offered faster gameplay and greater challenges.

A modified Windows version is available on the Microsoft store under the name "Pinball Star."