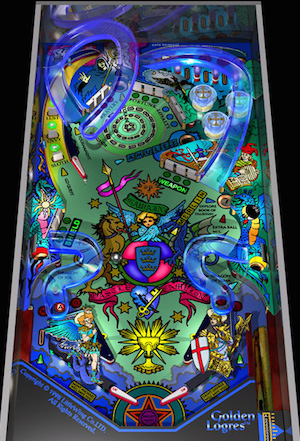 Golden Logres is a pinball video game by LittleWing, originally released in 1998 for the Apple Macintosh and IBM Personal Computers. While other LittleWing games strove to directly duplicate the Physical Pinball Table experience on a computer, Golden Logres was an experiment in welding conventional Pinball gameplay with that of a Role-Playing Game.

The game is divided among three playfields:

Successfully completing all of these tasks returns gameplay to "Camelot", where King Arthur is revived, Logres is blessed with eternal prosperity, and the player celebrates with Fandango Multiball. Skillful shooting is required to complete each mission, along with raising the characters' attributes and equipment capabilities with key targets, and animated cutscenes advance the narrative. Beginners can also play a three-ball game on any of the tables to become familiar with them.

Not surprisingly, Golden Logres left gamers divided. Die-hard pinball players loved it for its challenging gameplay, innovative multi-layered objectives, and the focus on score-maximizing strategies. Casual players, on the other hand, found it frustratingly difficult and confusing, as it was a far departure from the pick-up-and-play nature of most pinball games.

In 2000, the game was released for the PlayStation under the names Pinball Golden Logres (Japan) and Pinball Power (Europe). In Japan only, Success Corporation also released a modified adaptation for the Sega Dreamcast as Neo Golden Logres. It included significant gameplay changes, most notable a timer-based gameplay that could be extended only by continuously skillful shooting. Unfortunately, even die-hard pinball fans were turned off by its muddled graphics and a heavyset physics engine that made it much harder than the original.