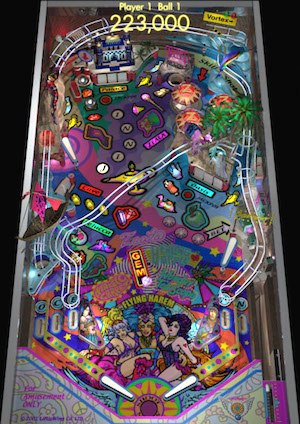 Jinni Zeala is a pinball video game by LittleWing Co. Ltd. It was released in 2002 for the Apple Macintosh and IBM Personal Computer.
Advertisement:

The game is named after Zeala, the magically mischievous jinni who's your host for his fabulous festivities. As the lights flash and the music plays, collect the Magic Carpet from the Palace, find gold coins in the Cave, retrieve the Wonder Telescope from the ocean, and ride the pink camel to the Oasis to pluck the Healing Apple. Visit the Fortune Teller for a random reward, then rack up some extra points with the Zeala Multiball. Complete the game's five Bonus Stages and you'll get invited to join Anita and Bonita in the Flying Harem, where you can show off your pinball skills and score the Harem Jackpot.

Jinni Zeala is one of LittleWing's most frivolous titles, with a wacky sense of camp humor throughout. There's no attempt at historical or cultural authenticity, and the mood is more of a neon-lit college theme party than anything else. The game's difficulty is fairly easy, but total novices can also use the "Lollipop" setting to learn the game rules. Expert players are not left out, as the stackable Bonuses and Multiball modes allow lots of strategy to maximize scores.

In 2008, LittleWing released Psychedelic "O", a modified version of Jinni Zeala to promote the Japanese rock band Love Psychedelico. It was bundled as a novelty for the initial release of the album called "Aha! (All We Want)".