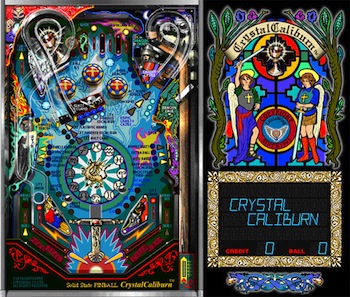 Crystal Caliburn is a digital Pinball game produced by LittleWing Co., released in 1993 for Microsoft Windows and Apple Macintosh computers. It is generally regarded as one of the hardest pinball games in LittleWing's library.

The game itself is a pinball interpretation of the Quest for the Holy Grail, with the player as King Arthur. He must first assemble the Knights of the Round Table, then send a single Knight (ball) on a quest to Glass Island and retrieve the Grail. Along the way, the player can acquire artifacts like a Magic Shield, Magic Spear, and Excalibur, and face challenges such as Surprise Attacks, encounters with the Devil Dragon, and the Last Battle.

A sequel, Crystal Caliburn II, was released in 2012 for Windows and Macintosh computers, iOS, and Android phones.