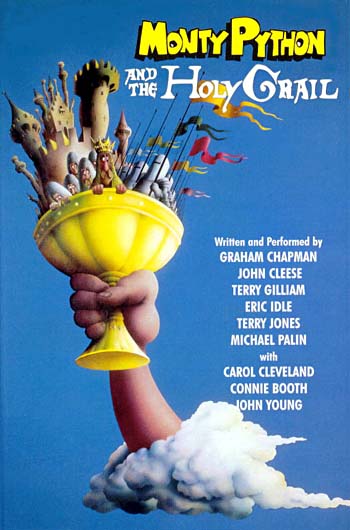 After the success of Monty Python's Flying Circus in the UK and US, the six Ambassadors of Anarchy got the right to make films. This 1975 effort was their second go-round (after 1971's And Now for Something Completely Different, which featured redone versions of several sketches from the first two seasons of Circus) and one of their most famous and oft-quoted.

A complete skewering of the Arthurian Legend, it tells the story of King Arthur and his attempt to build a court at Camelot. note  'tis a silly place. Once he assembles his crew (off-screen, mostly), he has a vision of God (or a reasonable drawing of same by Terry Gilliam based on a famous cricket player

), informing him that to cement his name in immortality, he must seek the Holy Grail— the cup used at the Last Supper of Christ, and which caught his blood after the crucifixion. After a long and roundabout search which leads them to the far corners of the Kingdom and past idiosyncratic knights, the world's oldest harem, and a very nasty rabbit, they discover the Grail is supposedly located in a very old castle, which has fallen into the hands of those heathen enemies— the French.

Full of random quips, hilarious stand-alone scenes, and the type of comedic anarchy and anticlimax that practically defines British comedy even to this day, the movie was a low-budget success story and has become a cult classic over time. It also revealed Michael Palin's versatility, as he played something like 10 roles over the course of the film. He's not alone, of course; the majority of people and about 80% of the lines are from the Pythonites, leading to some interesting blocking and directing decisions. (Watch Lancelot's helmet.)

Or, if you want to be "artsy" about it, see Eric Idle's Broadway adaptation, Spamalot!.

The film was adapted into a point-and-click adventure game for CD-ROM in 1996 as Monty Python & the Quest for the Holy Grail by 7th Level, as what would be the second of the company's three Monty Python-related projects.

Just a side note— because Terry Jones was, in fact, an Arthurian scholar, this happens to be not just the funniest but the most accurate film adaptation of Malory's Le Morte d'Arthur ever made. Though it is not to be confused with the original myths or other tellings of King Arthur and the Holy Grail. Some of the humour, in fact, is derived from typical Pythonian spins on events and characterizations from the original tales. It also meant that Jones knew how to caricature a story already muddied by Pop Culture Osmosis.

Bring out your tropes!

Now go away or this page shall taunt you a second time-a.
Feedback

Example of:
Only a Flesh Wound