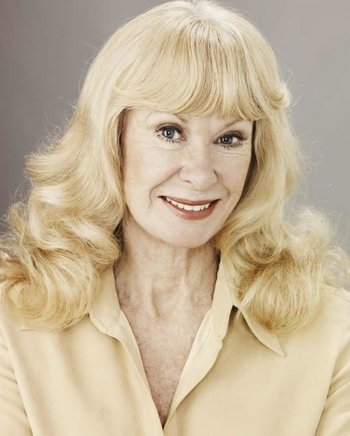 Carol Cleveland (born 13 January 1942 in London, England) is a British actress and comedian, best remembered as the unofficial "seventh member" of Monty Python. When John Cleese, Eric Idle, Terry Gilliam, Graham Chapman, Terry Jones and Michael Palin weren't walking around in drag themselves or actually needed an attractive woman for a sketch they usually cast her in the role. In the 1999 BBC documentary to celebrate the 30th anniversary of Monty Python Cleveland acknowledged that the Pythons were aware that they didn't have much else for her to do and apologized many, many times for it. Palin has said in several interviews that they all went to boys only schools and as a result weren't used to writing funny parts for actresses.

Despite the fact that Cleveland usually didn't have the funniest lines, didn't write any material herself and only appeared in minor roles she is still fondly remembered by fans of the show. As the most recurring actor apart from the six main actors she is recognizable to anybody who ever watched the series and films. She also played parts on their albums and even went on tour with them and performed on stage. Even when they needed female voices for characters in Terry Gilliam's animated skits her voice was recorded. The Pythons liked her because she was just as devoted to their madcap comedy as they were and in that regard she definitely deserves her unofficial nickname as "the Seventh Python". note  Another person who received this nickname was Neil Innes, former The Bonzo Dog Band member, who co-wrote a lot of their songs.

Her work with Python is still the thing she is most famous for, yet she acted in a lot of other TV productions and films too. In the controversial (as in banned in the US for years) The Avengers (1960s) episode "A Touch of Brimstone" she was basically a sub for the Hellfire Club. In the Are You Being Served? episode "Friends and Customer" she played a customer in their store. And in Only Fools and Horses episode "The Miracle Of Peckham" she played an American reporter. In The Return of the Pink Panther she plays a swimming pool diver.