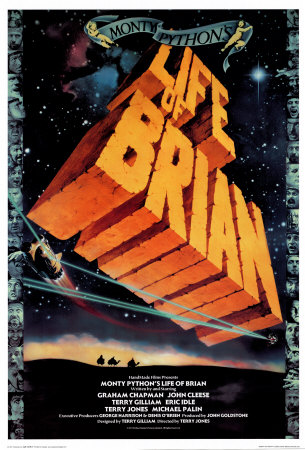 ♪ Always Look on the Bright Side of Life (whistle) ♫
"He's not the Messiah! He's a very naughty boy!"
— Brian's mother
Advertisement:

Monty Python's Life of Brian is the third film from the Monty Python troupe, directed by Terry Jones and released in 1979.

The film follows the misadventures of Brian (Graham Chapman), who was born just down the street from Jesus Christ. Dissatisfied with his life as a Jew in Roman territory, Brian attempts to join La Résistance (though mostly because there's a very pretty girl there) and ends up fleeing from the Romans. The film is notable for being the only Python feature to make a solid attempt at a single, cohesive plotline rather than a Random Events Plot or collection of sketches.

Upon its release, this film drew a lot of controversy, mainly in the form of criticism from various religious groups and orders due to what was perceived as a disrespectful mockery of Jesus Christ (which in turn was frequently based on the erroneous belief that Brian was intended to be/actually was Jesus, rather than just someone whose life parallelled him in several ways). Rather than mocking Jesus, however, the film actually treats the source material with a lot of respect. It just points out that Christianity may have missed the point on some of what Jesus taught. It is not unheard of for the movie to be regarded as an Affectionate Parody by actual ministers.

Holy Flying Circus, a made-for-TV comedy about the controversy surrounding this film, was released on BBC 4 in 2011. Eric Idle later joined with Monty Python's The Meaning of Life composer John Du Prez to write an oratorio based on the film, Not the Messiah (He's a Very Naughty Boy).

I think he said "Blessed are the tropemakers!"

See? It's the end of the film! Incidentally, this record is available in the foyer!
Feedback

Brian manages to create a messianic following, entirely by accident. Even telling them to fuck off doesn't help.

Brian manages to create a messianic following, entirely by accident. Even telling them to fuck off doesn't help.