Film / Nudist Colony of the Dead 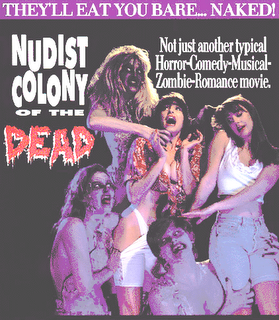 "It's an inky dinky do dah morning..."
Advertisement:

Nudist Colony of the Dead is a 1991 horror-comedy musical film by Mark Pirro about exactly what the title suggests. A group of teenagers sent to religious retreat are haunted by its former owners: an undead nudist colony. The movie was filmed mostly in Sacramento, California and made on a production budget of $35,000.

A nudist colony named "The Sunny Buttocks Nudist Colony" is being shut down after complaints are made about it by a group of religious Moral Guardians. When the fundamentalists take the matter to court, they succeed and force the nudists out of their home. Not taking the matter lightly, the nudists commit a suicide pact, but in doing so vow that their spirits will haunt the land and one day enact revenge on the religious zealots that stole their land from them. Many years later, a new group of rambunctious young adults are sent to a religious retreat that was once the site of the nudist colony. Unknown to them, their presence ends up reawakening the nudists, turning them into undead zombies bent on getting their revenge.

Also, did we forget to mention it's a musical?

Nudist Colony of the Dead provides examples of the following tropes: