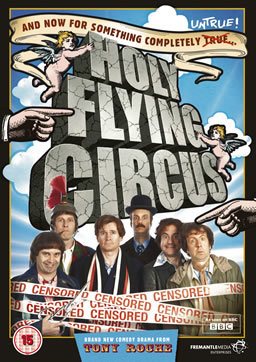 A 90-minute, made-for-TV comedy film from 2011 focusing around the controversy that surrounded Monty Python's Life of Brian.

The film is based around real life events, and centres around an infamous television debate on the Friday Night, Saturday Morning show that John Cleese and Michael Palin participated in against prominent critic and broadcaster (and devout Anglo-Catholic) Malcolm Muggeridge and Mervyn Stockwood, the then-Bishop of Southwark — both of whom, it later transpired, had missed the beginning of the film, in particular the scenes that make it explicit that Brian is not Jesus, and who spent more time during the actual debate making cheap jibes against the comedians rather than attempting to rebut their arguments. However, these events are depicted in an irreverent, surreal and — dare we say — Pythonesque fashion, interspersed with non sequiturs, sketches and animation.