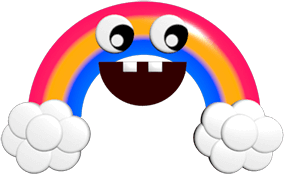 "Red and yellow and ... eh, you get the idea."
Advertisement:

Rainbows are awesome. They're bright, attractive and optimistic, so it's no wonder that artists will frequently bring a splash of color to whatever they're creating by adding a rainbow.

But they're hard to draw. The colors in a rainbow vary continuously, not in discrete stripes. Fortunately, it's commonly held that rainbows have seven colors, so seven stripes are often considered "enough". However, a number of reasons — simplistic art style, limited palette, low graphics resolution — mean that it's not always practical to include even that many.

That's when you use a Rainbow Lite. It's a quick way to convey the idea of 'rainbow' without using the whole spectrum. Two notable varieties include:

In both cases, the colors will be sharply delineated, as opposed to the actual blending from one to the other you get in a true rainbow. Don't count on them being in the correct order, either.

We really ought to note that the distinctions between colors are somewhat arbitrary and indigo in particular only made it into the "official" rainbow because it fit with a numerological theory Isaac Newton had. Strictly speaking, rainbows don't actually have any distinct color bands — their colors are one gradient from one end of the visual spectrum to the other, and the way we see them as being subdivided into distinct bands is a result of the way our minds instinctively try to categorize the world to understand it better. Thus, in a certain sense, every depiction of a rainbow is a Rainbow Lite that only contains a few of the shades of a real rainbow.