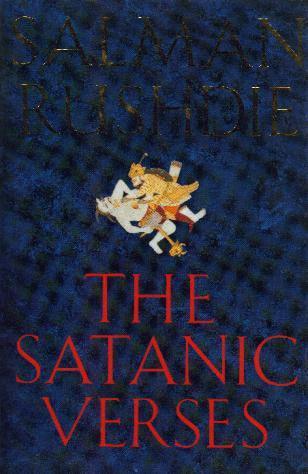 Flame Bait isn't the word for it...
''To be born again, first you have to die."
Advertisement:

On a winter's day, two men — Gibreel Farishta and Saladin Chamcha — fall out of a hijacked airplane. Miraculously, however, they survive the fall unscathed — except for the fact that both suddenly undergo a strange physical transformation; Gibreel is developing a halo while Saladin is growing horns and hooves...

Published in 1988, The Satanic Verses is the novel that famously led to the infamous "Rushdie Affair," in which writer Salman Rushdie's creative interpretation of Islam caused the Ayatollah Khomeini to issue a fatwa against his life, which still stands today. Ironically, this has only increased the book's popularity. Though as noted by Rushdie, ruefully, it meant that the book is more talked about than actually read, and the controversy surrounding it is better-known than the actual contents. The fact that it's a highly convoluted Genre-Busting story with a Mind Screw vibe signifies that it was hardly ever meant as a bestseller book.

At its core, the book actually has three sections:

Despite its title, and despite the fact that Satan is heavily implied to be The Narrator, the book has very little to do with Satan explicitly (the eponymous satanic verses refer to several heretical verses of the Qu'ran). Symbolically, however...

Tropes appearing in The Satanic Verses include: