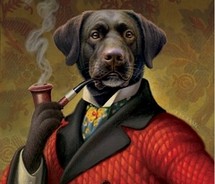 It can even make a dog look distinguished!
"I lit my pipe again. It makes you look thoughtful when you are not thinking."
— Philip Marlowe, Farewell, My Lovely
Advertisement:

When a writer wants to show that a character is just a little bit "above" everyone else in the group, in one way or another, he'll give them a pipe. The man with the pipe is usually depicted as being a little bit older, a little bit (or a lot) smarter (often a Professor or a Great Detective), in control, composed, unruffled and dignified. Perhaps even pompous, snooty, aloof or a bit haughty. Properly packing a pipe for smoking requires a bit of skill to judge - too loose, and the tobacco will immediately burn out; too tight and the smoker won't be able to draw enough air through it. When being held, the stem points back at the smoker, drawing attention to them as being the most important; it can also be used by them to point with.

Generally does not apply to hillbilly/sailor corn cob pipe smokers, who usually defy the trope, though there are notable exceptions.

This is Always Male but, as always, Tropes Are Flexible. A key element in the attire of the Quintessential British Gentleman, often enjoyed in a Smoky Gentlemen's Club. Also a key wardrobe accessory for the Standard '50s Father. The smoker is often, but not always, a Good Smoker. Compare Cigar Chomper, Smoking Is Cool. Occasionally revealed as a Bubble Pipe for comedic relief.