Film / A Song Is Born 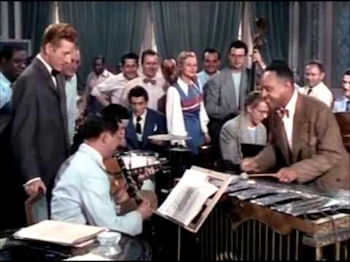 . Drummer Louie Bellson (left of Virginia Mayo, center), bassist Harry Babasin and pianist Mel Powell (to Virginia's right), and Louis Armstrong and Tommy Dorsey (behind Danny Kaye to his left and right, respectively) can be seen in the background.
Advertisement:

A Song Is Born was a 1948 musical remake of the 1941 Screwball Comedy film Ball of Fire, which was also made by Howard Hawks. Besides having Danny Kaye and Virginia Mayo cast in the lead roles, it features an All-Star Cast of Jazz and Big Band music legends including Benny Goodman, Tommy Dorsey, Louis Armstrong and Lionel Hampton.

A Femme Fatale and nightclub torch singer on the run from the law (and eventually, her gangster boyfriend) hides out in a music institute run by seven "longhair" (1940's slang for lovers of classical music) professors. Hilarity (and a lot of great music) ensues.

Not to be confused with any of the four versions of A Star Is Born.

Tropes found in A Song is Born include: