Comic Book / Challengers of the Unknown 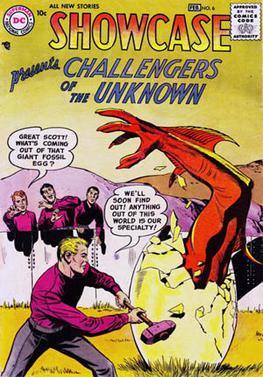 The Challengers of the Unknown are a Badass Normal hero team appearing in DC Comics since 1957. It is not known exactly who had a hand in their creation, as their first appearance ran without writer credits, but the artwork is definitely by Jack Kirby and he probably had a hand in shaping the story, too.

Ace Morgan, Prof Haley, Rocky Davis, and Red Ryan miraculously survive a plane crash and are inspired to devote their lives to investigating mysteries and facing down strange threats, fearing no danger because they feel that they've already been granted extra time. They debuted in Showcase #6 in 1957 and made a few more appearances in that title before being given their own series, which ran from 1958 to 1971. They were subsequently rebooted post-Crisis in a 1991 miniseries, and reimagined in the New 52 as competitors in a reality TV show, as well as making guest appearances in other series.

A new team took up the name in a short-lived 1997 ongoing. A 2004 miniseries also introduced a new team, reimagining them and the original Challengers as having been subjects of a mind-control experiment by a global conspiracy who escaped the leash. A New 52 version combining the original and 1997 teams appeared in DC Universe Presents, but we don't talk about that. Another new team gets an ongoing in 2017, New Challengers, as part of DC's Dark Matter initiative.

By the way, if the premise sounds familiar, most Kirby fans say that one of the best arguments that he was the real creative force in Marvel Comics was that he basically recycled it in combination with Stan Lee's ideas for more complex Super Hero characters to created the groundbreaking Fantastic Four, which jump-started the creation of the Marvel Universe.

Outside of comic pages, the Challengers have appeared in a novel about the team, the animated adaptation of DC: The New Frontier (although all of them besides Ace are Demoted to Extra in comparison to their prominent roles in the original limited series), a few Batman: The Brave and the Bold episodes, and Teen Titans Go! To the Movies.

These series contain examples of: