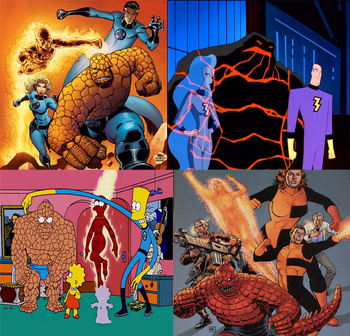 All of these families seem pretty "fantastic".note Clockwise from top-left: The original Fantastic Four, The Terrific Trio, the First Family, and The Simpsons.
"And don't tell me there's no way to make a good Fantastic Four movie! It's called The Incredibles, and it's perfect."
— Honest Trailers on Tim Story's Fantastic Four duology
Advertisement:

The Fantastic Four were Marvel Comics' first superhero property of The Silver Age of Comic Books, often credited with turning the company into the massive juggernaut it is today. For this reason, they are often called Marvel's "First Family", and they remain one of its core intellectual properties to this day.

Do not confuse with Fantastic Mr. Fox.