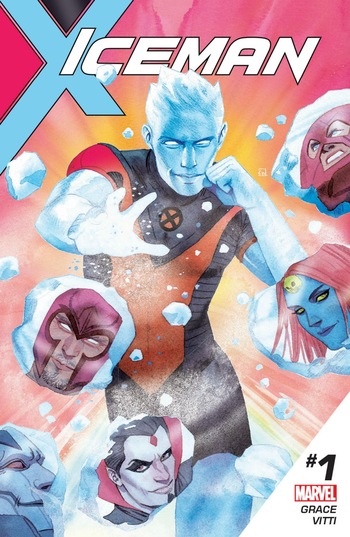 Fighting villains and personal demons for years has never stopped him cold.
My name is Bobby Drake. Iceman. I've been an X-Man, an X...Factor-ian, a Defender, a Champion (don't ask). I've been a super hero since before I was old enough to shave. I've stood side by side with the toughest, most powerful heroes in the known universe and always held my own. But today... today I need to be something more. So go ahead, call me a joke if you want. Label me the X-Man with the lamest power ever. But a man of untapped potential? Don't you dare ever call me that again!

During the All-New, All-Different Marvel era, there were two Bobby Drakes populating the mainstream Marvel Universe: original Bobby, who's since grown into adulthood, and a time-displaced teenage Bobby, who (with his fellow original X-Men) was pulled from the 1960s into the present. Each served on a distinct faction of the X-Men: adult Bobby with the Extraordinary X-Men, teenage Bobby with the All-New X-Men. At the end of Extermination, however, the younger, time-displaced Bobby was returned back to his own time period and had his memories wiped.

Historically, he was also a member of The Defenders, the original X-Factor lineup, and the (much-maligned) Champions of Los Angeles.

Iceman has appeared in: