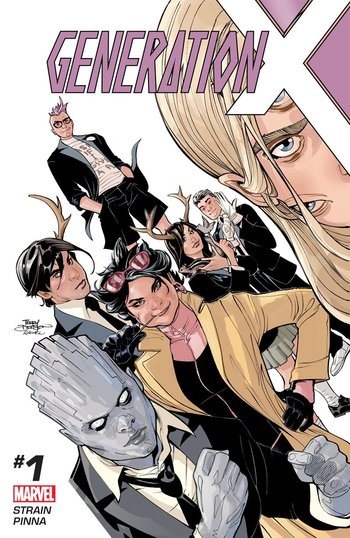 Generation X is a 2017 comic book written by Christina Strain (The Magicians, Runaways) and drawn by Amilcar Pinna, with covers by Terry & Rachel Dodson. Published under the Resurr Xion umbrella of titles spinning out of Inhumans vs. X-Men, it is a revival of the Generation X title and concept, originally written by Scott Lobdell and drawn by Chris Bachalo.

Upon returning to the Xavier Institute —now located in Central Park— Jubilee is disappointed to learn that she hasn't been assigned to training a new team of X-Men by headmistress Kitty Pryde — instead, teaching a class of students with useless and unreliable powers, who aren't suited to be X-Men or to be ambassadors for mutantkind.

After nine issues, Generation X renumbers to #85 note (the combined issue total of both volumes up to that point) as part of the Marvel Legacy initiative, with Strain and Pinna remaining onboard as the creative team. The series concludes after twelve issues in total, ending at #87.