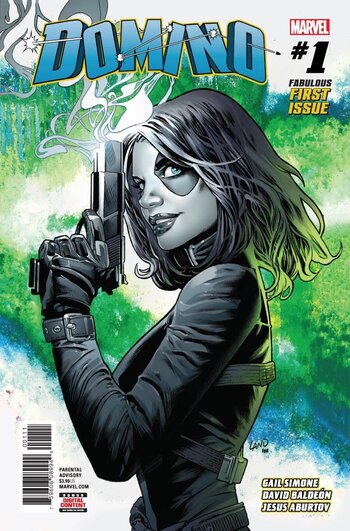 The cover to Domino vol 3 #1.
Advertisement:

The Marvel Comics character of Domino has had three self-titled books so far:

Domino Vol 1 (1997) is a three-issue mini-series written by Ben Raab, with art by David Perrin. It concerns Domino trying to find and rescue Milo Thurman, her former husband, but she has to battle Lady Deathstrike first.

Domino Vol 2 (2003) is a four-issue mini-series written by Joe Pruett and Brian Stelfreeze, with art by Stelfreeze. It's about Domino trying to find her mother and the conspiracy that's set in stopping her.

Domino Vol 3 (2018–2019) is a series written by Gail Simone, with art by David Baldeón. Domino now has her own crew of badass women — the Posse! With Outlaw and Diamondback, she takes jobs that none of them can do alone. But when a mysterious woman named Topaz shows up on her birthday to kill her and somehow causes her luck powers to go haywire, she'll need their help just to stay alive. The series lasted ten issues and one annual. It led into the mini-series Domino: Hotshots.