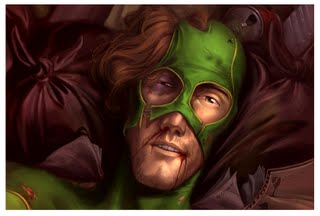 Now, he really looks heroic!
"Domésticonote Spanish for "Domestic" or "hand-made" is a super-hero story that sounds real from every point of view, and yet includes every aspect required for said genre. There is a genesis of his powers. The deep loathing of his nemesis. The victims that needs rescue. An extravagant choice of tools. The helping Sidekicks (à la Alfred). And of course, his super powers (fighting until the very end, an uncommon quality among mortals)"
— Liniers (prologue)

Doméstico (Spanish for Domestic/Home-made) is an Argentinian one-shot comic created by Sebastian De Caro and Diego Greco (bad dog). It's a realistic story about a normal (but somehow crazy) guy who one day decides to dress up on a superhero costume, and be a superhero himself. Since the setting is realistic, let's just say things don't go exactly according to his plans.

This comic book pre-dates Kick-Ass the comic by a year, and has more than a few things in common. Besides the setting of "normal dude who dress up as a super-hero" and who "gets his ass kicked hard time", the suits' similarities are astonishing. Said similarities are even bigger in the Movie, and the actor playing Kick-Ass resembles Doméstico a lot.

For more info about Kick-Ass/Domestico, you can visit this blog