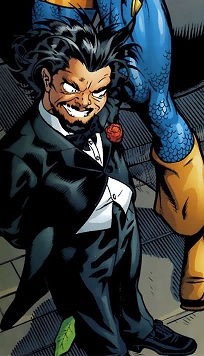 Dr. Psycho: stunted and twisted in body and spirit.
Tyrion: Anyone named Desmond Crakehall must be a pervert.
Sansa: I hear that you're a pervert.
Tyrion: I am the Imp. I have certain standards to maintain.
— Game of Thrones
Advertisement:

Dwarfs (not that kind, the real kind) note Dwarves are fantasy creatures, dwarfs are short humans, and the polite term for the latter nowadays is "little people." This is, however, a relatively recent distinction that started with J. R. R. Tolkien. As in nearly everything else, most later fantasy authors have either followed his lead or not done so in a very pointed way to make a statement of some kind. in fiction are fairly uncommon. When they do show up, they tend to be either comic relief or playing the aforementioned fantasy creatures. But then, there's these guys.

The Depraved Dwarf is a pint-sized bucket of malice. He (and it's pretty much always a he) is either a sadistic psychopath, a twisted rapist (presumably of the Mickey-slipping variety rather than the hold-them-down type), or at the very least a violent, cold-blooded criminal. They tend to show up when the hero has been rendered helpless. Often, expect giggling. Can go hand in hand with The Napoleon, if the Depraved Dwarf's misanthropy is implied to be a response — albeit a misdirected one — to discrimination and abuse faced as a result of their short stature.

If he's The Don or a similar leadership role, see Mister Big. May or may not overlap with Little People Are Surreal. For villains with other disabilities, see Evil Cripple and Eunuchs Are Evil.