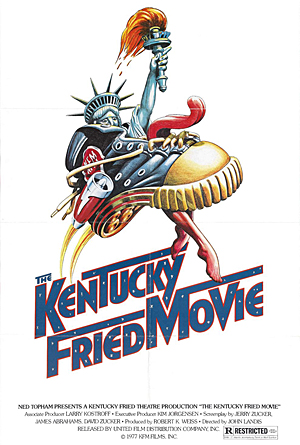 "It will knock your socks off."
"I'm not wearing any pants. Film at 11."
Advertisement:

The Kentucky Fried Movie is a 1977 Sketch Comedy film directed by John Landis and written by Zucker, Abrahams and Zucker, based on their earlier work at the Kentucky Fried Theater. The film is affectionately remembered for its groundbreaking comedic style.

The film consists of a variety of sketches parodying different film genres. The segment "A Fistful of Yen" parodies Kung-fu movies of the style made famous by Bruce Lee, and takes up over a third of the film's 83-minute running time. None of the other segments are longer than six minutes: they include "A.M. Today", a satire of morning news; "Feel-a-Round", a satire of movie theater stunts like Smell-o-vision; "Zinc Oxide and You", spoofing '50s high school educational films; and "The Wonderful World of Sex", in which a couple uses a phonograph record sex manual.

Like all ZAZ works, parody is highly valued, and the fourth wall is almost nonexistent.note Literally! The production was so cheap that many of the sets were built outdoors without 4th walls or even ceilings so they could be lit naturally.

Not to be confused with Kentucky Fried Chicken.

The tropes you are reading have been vandalized. Film at eleven:

The extended skit "A Fistful of Yen" (at 31 minutes, by far the longest sketch in the film) also features the following tropes:

Example of:
Place Worse Than Death