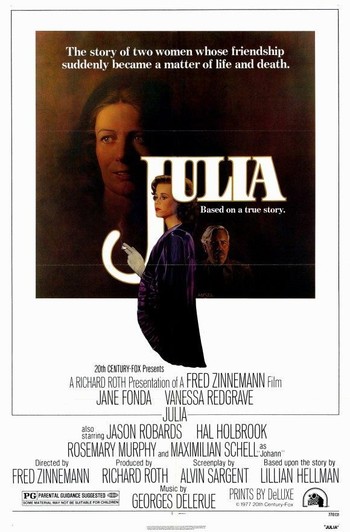 "I think I have always known about my memory. I know when the truth is distorted by some drama or fantasy. But I trust absolutely what I remember about Julia."
Advertisement:

Julia is a 1977 film directed by Fred Zinnemann and adapted from one chapter of playwright Lillian Hellman's 1973 memoir Pentimento.

Set in the 1930s, the film stars Jane Fonda as Lillian Hellman and Vanessa Redgrave as the enigmatic title character. An old childhood friend of Lillian, Julia has grown up to become a part of the "Popular Front" against fascism in Europe. The centerpiece of the film occurs when Lillian, following instructions sent by Julia, goes on a mission to deliver aid to the anti-fascist resistance in Nazi Germany — not a small deal considering Lillian is Jewish!

The accuracy of Pentimento is questionable to say the least, but the film version was a success; it received eleven Academy Award nominations, winning three of them. Also appearing in the cast are Jason Robards (as Lillian Hellman's mentor/lover Dashiell Hammett), Rosemary Murphy (as Dorothy Parker), Maximilian Schell, Hal Holbrook, John Glover, and some unknown named Meryl Streep making her big-screen debut in a minor role — whatever became of her, anyway?