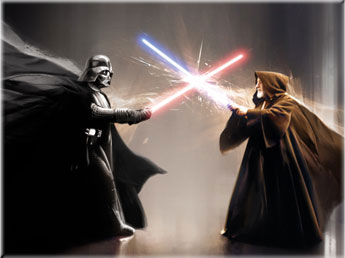 Guess who's the bad guy.
Brainstorm: Color-coded lasers. Red if you're an Autobot, purple if you're a Decepticon. And the best bit is this: the color would change depending on who's firing the gun.
Nautica: So the gun would-
Brainstorm: Know if you were bad or good! Yes! What do you think? Good idea? AMAZING idea? Be honest.
— The Transformers: More Than Meets the Eye
Advertisement:

In an age where every other hero is an Anti-Hero, how do you tell who to root for? Why, you look at what color the character wears, of course! In visual entertainment, who's good and who's evil is usually distinguished by the colors, and woe be to those who are colorblind.

In this trope, different factions will have competing color schemes that makes it instantly clear who the good guys and bad guys are. This can be in the form of clothing, hair or eyes, auras, Energy Weapons, magic powers or a general Color Motif for factions. This has some basis in real life, as during the musket era (i.e. the American Revolution) armies wore contrasting colors to avoid friendly fire. Nevertheless, No Real Life Examples, Please!

Tropes like Shades of Conflict and The Dark Side take their names from this idea, but are about moral differences rather than actual colors.

Please only add examples that don't clearly fit any of the subtropes, or combine multiple subtropes in an unusual way. To fit, a work must have both good colors and evil colors, and a color contrast between the two.