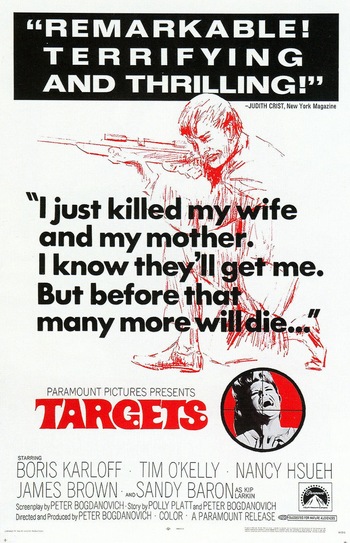 Targets is a 1968 horror/thriller film, produced by Roger Corman and written and directed by Peter Bogdanovich, that focuses on two men in Los Angeles.

One is Byron Orlok (Boris Karloff), a beloved but aging horror film actor who has announced his decision to retire from film-making, feeling that Real Life is churning out more and far worse horrors than anything he can hope to put on screen. The other is young Vietnam vet Bobby Thompson (Tim O'Kelly), who unknowingly sets about proving Orlok's point when he finally snaps under the soulless banality of his existence, gathers up an arsenal, and goes on a deadly shooting spree

. Inevitably, the paths of the two men cross...

The film is a worthy coda for Karloff's career, a fine directorial debut for Bogdanovich, and a symbolic passing of the torch from one generation of movie-makers to the next.