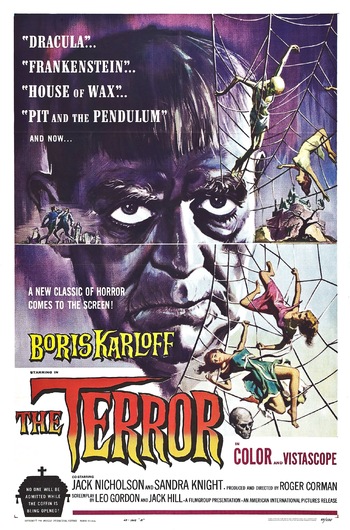 Good luck figuring out what the "Terror" really is.
"Out of all the movies that Jack Nicholson's famous for, I wonder if anyone's ever talked to him about this one? If I had the chance, I'd say, 'Man, you gave me The Terror!'"
— James Rolfe
Advertisement:

The Terror is a 1963 horror film directed by Roger Corman, starring Boris Karloff in one of his last film roles and Jack Nicholson in one of his first.

In 1806, a lost French soldier named Andre Duvalier (Nicholson) is saved by a strange woman named Helene (Sandra Knight). Seeking refuge in a castle owned by the mysterious Baron Von Leppe (Karloff), Duvalier again finds the woman, who the Baron thinks is the ghost of his long-dead wife. However, Duvalier is instead convinced that the woman has been hypnotized by a witch, tormenting the Baron to the brink of madness.

The film was infamously made using left-overs from The Raven (including both the cast and sets), which Corman finished two days earlier than expected. Having Boris Karloff on hand, Corman decided to write and film his scenes first, and then figure out everything else afterwards as there wasn't even a script. Also notable is that Corman wasn't the only director, as the movie had at least four other people directing scenes, two of them being Francis Ford Coppola and Jack Nicholson. The result is, as James Rolfe put it, "a mishmash of two things: 1, people walking around in dark rooms, and 2, people explaining new plot twists every other scene as if ten different M. Night Shyamalans were involved".

The movie is in the public domain, which means one can very easily find it either online or as part of a box set with other such movies. While it's not technically part of Corman's "Poe Cycle", it often gets lumped in with the others due to using the same cast and sets as The Raven, as well as generally feeling like something derived from Poe's works.

After filming of this movie was complete, Corman realized he still had two more days of filming with Karloff on the contract. He thus appointed a young Peter Bogdanovich to create a movie using stock footage from The Terror, starring Karloff. The result was Targets.

the movie as part of Monster Madness 2010: Camp Cult, and eventually did a feature-length commentary

on it with Mike Mattei.

Not to be confused with the novel of the same title by Dan Simmons or the TV series based on it.