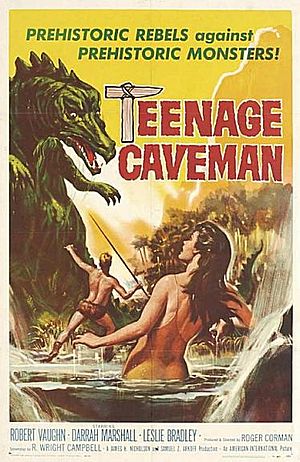 Robert Vaughn stars as a 26-year-old teenage caveman with styled hair who seeks to discover what is in the uncharted jungles beyond his tribe's campsite. It is against the Word (and the Word is the Law), but he breaks it anyway. Soon he discovers a strange creature that kills with its touch. We later learn that this is not a prehistoric tale, but a post-apocalyptic tale, and the strange creature is a 500-plus year old irradiated scientist in a radiation suit.

Not to be confused with Larry Clark's MUCH darker 2002 film of the same title, or with Captain Caveman and the Teen Angels.