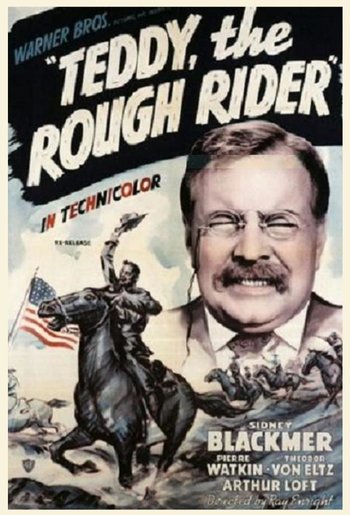 Teddy, the Rough Rider is a 1940 short film (19 minutes) directed by Ray Enright.

It is a ludicrously compressed biopic of President Theodore Roosevelt. In nineteen minutes the film follows TR from 1895 to his death in 1919. We start out with Roosevelt taking office as police commissioner of New York City and rooting out corruption. The strong impression that he makes gets him picked to be Assistant Secretary of the Navy under President William McKinley. When the Spanish-American War breaks out in 1898 Roosevelt forms his own regiment, the Rough Riders, which famously charged up San Juan Hill in Cuba. The fame Roosevelt wins in Cuba gets him elected Governor of New York in 1898, but corrupt New York Republicans, wishing to get rid of their reformist governor, get him Kicked Upstairs to the office of Vice President in 1900.

This backfires spectacularly when McKinley is assassinated in 1901 and Roosevelt becomes President. His 7 1/2 years in office yield triumphs such as brokering the end to a coal miners' strike, winning the Nobel Peace Prize for negotiating an end to the Russo-Japanese War, and building the Panama Canal. The big failure of his career, his loss as a third-party candidate for President in 1912, is completely omitted.

Sidney Blackmer, who played Teddy Roosevelt in this and six other films, would later find fame playing a Satanic high priest in Rosemary's Baby.