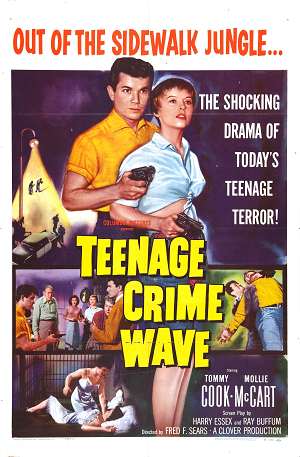 Our story begins with a doughy old man hitting on a young woman, Terry Marsh, in a bar. She lures him to be mugged. Unfortunately, an innocent girl by the name of Jane Koberly is brought along on a blind date with Al, one of Terry's gang.

The mugging, performed by Terry's boyfriend Mike Denton, goes off without a hitch at first, and Mike and Al get away. Jane and Terry are caught by the police, cuffed and stuffed in prison.

Because Jane wouldn't talk about what she knew (the only one she really knew beyond a first name was Terry), she's fingered as an accomplice in the court system, and her parents are too busy being ashamed to help her out. Before long, Jane and Terry are on the way to the reformatory.

But lo! Mike has been tailing the prison van, and frees them, wounding the prison matron and killing the driving officer. But since Mike didn't kill both cops, a description is sent out, and the gang must hole up in a farmhouse. There, they take two farmers, and later their war-hero son, hostage — but they can't call Al for help because the farmers' phone is on a party line, and anything suspicious anyone says will be overheard by someone who might tell the cops.

Can Jane prove her innocence? Can Mike and Terry's Bonnie and Clyde–like rampage be stopped?