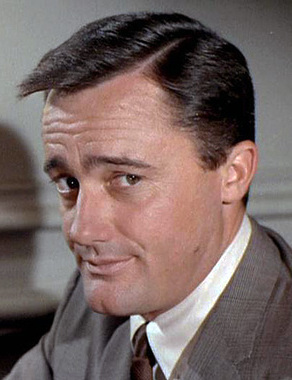 Bob's your U.N.C.L.E., your MAGNIFICENT Uncle!
"I have always been adventurous and rather daring."
Advertisement:

Robert Francis Vaughn (November 22, 1932 – November 11, 2016) was an American actor whose career stretched across more than half a century (he was literally an uncredited Spear Carrier in The Ten Commandments). He was also a published author and during the 1960s and '70s was a noted political activist.

In terms of his acting roles, it's a toss up whether he is more famous for The Man from U.N.C.L.E. or The Magnificent Seven, but with the latter he has certainly kept up a long term recurring association. In 1960, he played Lee (a professional gunslinger whose reputation has almost caught up with him) in the original Western film version (yes, it is a remake of a Japanese Samurai film). Then he played essentially the same character again, but with a different name in the 80s version of The Magnificent Seven IN SPACE! aka Battle Beyond the Stars. Not content with that, when CBS made a TV series based on the Magnificent Seven film in the 90s, Robert Vaughn was again on board but this time playing a different character, Circuit Judge and Cool Old Guy Orrin Travis. Did he stop there? Well, no. Aside from a small but amusing Shout-Out in the final of episode of the British Series Hustle, in 2013, Mr Vaughn again had a role in yet another version centered around a British amateur soccer team and Tandoori restaurant called The Magnificent Eleven

His other very fondly remembered role (also with recurring references in his career, but less often) is that of Napoleon Solo in The Man from U.N.C.L.E.. There was a Reunion Show in the 80's where he reprised the role and when he later had a regular recurring role in the final season of The A-Team, his U.N.C.L.E co-star David McCallum guest starred in an episode titled "The Say U.N.C.L.E. Affair" in direct reference to the episode titles of The Man from U.N.C.L.E. series. Another somewhat similar role that he played in the early 70s was Harry Rule, lead agent for another international crime-fighting group in The Protectors

But that's just the tip of the iceberg. Robert Vaughn's acting career stretches from roles in American films like The Young Philadelphians

(he was nominated for Oscar and Golden Globe awards) in the 1950s, to acclaimed British TV series like Hustle in the 2010s, with classic cop dramas like Bullitt (he was nominated for a BAFTA) and disaster movies like The Towering Inferno in between. He even went Back to School after UNCLE ended to get a Ph.D. in communications — his dissertation was on blacklisting in the entertainment industry.

On November 11, 2016, Robert Vaughn passed away at the age of 83 after a short battle with acute leukemia. Thank you, Mr. Solo.